Well, I've been back in the UK for one week now.

It was very easy to get back into UK living - in the house at least. Everything is the same and I can drive a car easily even after not driving one for 10 months. I have had a couple of twitches on things like putting toilet paper down the toilet instead of a bin by the side. Also having an urge to keep a torch with me at night incase the power goes off.

At first I was a little overwhelmed with broadband internet and spent ages on it look at news, reviews, finding what films I had missed, TV sites, ordering books and DVDs on Amazon etc.

I have also bought a new TV (my old one was over 15 years old and a new TV was something I promised myself when I got back.)

It was weird it being light outside at 21:00. In Ethiopia it only varies between 18:00 and 19:00 all year round. My sleeping was a bit disrupted with this and all the technology I had to play with. It was like I didn't want to go to sleep as there was so much to do, watch, search for.

Outside the house I feel a bit slow, for example in the big supermarkets, like everyone is moving around fast and I'm just looking at all the stuff and everyone going by in slow-motion.

I also have a sort of numb feeling, especially at first, and felt like the last two years hadn't happened. (Apparently this is normal.)

During the week I went to my niece's sports day, my nephew's drama performance and my old school summer fayre. It was good seeing everyone again and I still have the programmed Ethiopian "shake hands" build in. It's like an instant reaction now to shake people's hands as soon as I see them.

Back in the UK

I've just arrived back in the UK and have been able to add all the new posts for the last week. Don't miss reading them. (Start with the oldest first and work your way up to this one last.)

Friday 21:00 unable to have a shower as no water in the hotel (pump broken.)
22:30 Tried to get some sleep. Did sleep a little, but not much - kept waking up.
Saturday 01:15 Got up, took bags downstairs and was taken, by taxi, to the airport where I breezed through security - they didn't ask to look through my back-pack or cases, breezed through check-in (41kg total in the cases - no excess charge and they didn't notice my carry-on back-pack weighed in at over 12kg!!!) and straight through immigration with my exit visa.
So, not bad so far. It was 02:00, flight due to leave at 04:15.
The flight finally left at 05:10 - I was very tired by now and, like I said I am blanking my emotions quite a lot, so wasn't thinking about whether I am sad or not about going. 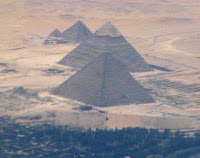 Arrived at Cairo 3h30 later and made my way through the checking to get to the connecting flight due to leave at 10:30. Boarded plane on time. By 11:00 they said they were waiting for air traffic control clearance in Europe and there would be a 10 minute delay. Around 11:30 they said that due to a "go-slow" strike by the Athens ATC, there would be a 2 hour delay, and could we get off the plane and go back to the gate. After another 10mins, still no-one had been allowed off the plane and they said that they had been given an alternative route, avoiding Athens airspace and around 12:00, 2h30 late, we took off. I slept on-and-off having now been awake pretty-much since midnight. When I was awake, there were some pretty spectacular views. When we got to the UK, I could clearly see from Margate, down to Dover and across the channel to Calais. While on the outskirts of Cairo I saw, for the first time in real-life, but from a long way away, the pyramids (see photo)
After a short delay to get a gate and a bit of a queue to get through immigration, I collected my luggage, which had joined me on the connecting flight, luckily! and finally met my parents after 10 months.
Within an hour, I was having a drive thru McDonalds, then home. Again, like last time, it was like I had never been away. It's really weird. Anyway, I will stop now, as I am very tired. I'll write more about how I am settling in in a few days.
Posted by Mark Sidey at 21:51 No comments:

Basically I spent the last few days in Ethiopia finishing off a last few jobs, and killing time.

One problem was no electricity for the entire three days (except a few hours over night which was no good to anyone, and a period of a couple of hours when the voltage was around 120V (it should be 220V)) Luckily the Yonnas hotel I am staying in has a generator which they put on from around 6pm until midnight.

The first job I had was to collect my passport from VSO and then change my remaining Ethiopian Birr currency into something useful in the outside world. The government is very tight on loosing dollars - which is a stable currency with world backing. The Birr, on the other hand, is only worth the paper it’s printed on outside .

The first two stops had no UK Pounds, Euros or even US Dollars and the last place said they could only change up to $150 without a resident’s permit and receipts from previous dollar to Birr transactions. My resident’s permit had to be given in to get my exit visa so no luck there. I began to think I would be stuck with a pile of paper, or alternatively I would have to splash out on lots of extravagant meals, souvenirs and a night in the Sheraton hotel.

One taxi driver offered me black-market dollars, but due to a misunderstanding of the accent, I thought he was offering 1 dollar for 40 birr (the bank rate is 1 to 11.3.) I realised afterwards he must’ve meant 14. Anyway, the risk of fake money was too great, and in-case anyone official is reading this, it is illegal so I didn’t do it!

I finally managed to sort this a few days later, in a legal way, I believe. I gave my birr to another volunteer who will be here for another year, and they electronically transferred money from their bank to mine in the .

Thursday’s job was to get police clearance by obtaining a “certificate of good conduct” that I will probably need in the when I get a police check to work in schools. This involved going to the Federal police department, queuing in several different queues, skipping some queues because I am white and handing over copies of passport, ID card and some photos. I also had to get fingerprinted (black fingers all day.) In about three weeks I will get the certificate (via VSO collecting it and posting it.)

On Friday I went to the VSO office to get my final clearance there and have an exit interview with my programme manager. I had a nice pizza on the roof of a 6-storey skyscraper looking out over the city for the last time, followed by a cake from a coffee shop. Then back to my room to see if I could do something about the excess baggage. (also finding out the water pump in the hotel is broken, so no shower!)

I think I managed to get the bags to within a kg or so of what they are supposed to be, so hopefully I’ll be let off with no excess charge. That’s as long as they don’t check my carry-on back-pack which is almost double the weight it should be!

Then it was watching TV and DVDs while I wait for time to go by before being taken to the airport.

This is the last entry written in .

I am now in Addis with about one day to go until I leave.

I have lots to tell you all, but the information is all on my laptop
which I cannot connect to the net at the moment as there has been no
mains power in Addis for two days.

Highlights include: college car breaking down, getting the squits just
before flying to Addis, being fingerprinted for my police clearance,
and more...

If not before, I will upload all the entries when I get back to the UK.