I went up to the school around 08:30 – found my recorder players, had a practice (the only girl player was missing – apparently she had missed the last two weeks of rehearsals as she was planting corn (girls have it much harder than boys in Ethiopia.))

The Parents’ Day programme included side-show games, traditional dancing from the various Ethnic groups, a gymnastics display, a report from the director (school principal) about the year in school, opportunities for the parents to ask questions, a speech from a couple of local education officials and certificates for some students. We were due to play at 04:00 (Ethiopian time or 10am.) We finally started at 11:45am – TIA (This is !) They all took turns to announce the tunes and played very well in front of an audience which must’ve been at least 1000 people. I was really proud of them. As is tradition, someone stuck Birr notes on their foreheads to show appreciation (they do this with dancers as well.)

Afterwards, I was thanked for my help in the school by the director and given a present (see right)

I then had a bit of time to sort things out, moving cooking stuff into the store room etc before going to the college later in the afternoon for my leaving do. There were about 50 people there, instructors and support staff, (I’m not sure how much of the reason for this was a free meal!) but we had injera and meat and then speeches and presents. My first present was… well, different: 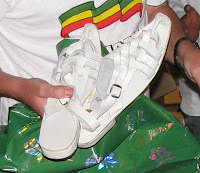 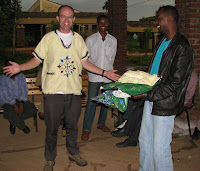 My second present was really good and will be useful if I do work in schools. (It includes some trousers as well.)

After that, back to the neighbour’s house again for some more card games (in candlelight – no power, obviously!) and finally back to mine.